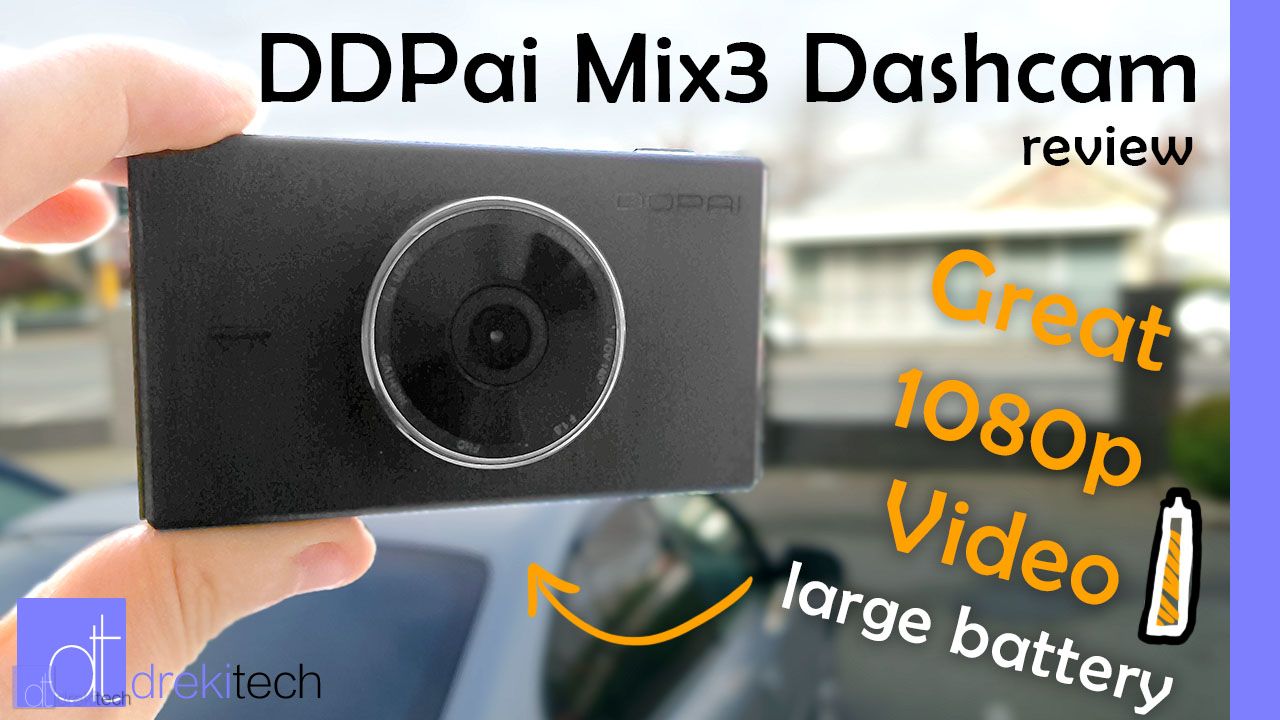 The DDPai Mix3 is a 1080p dashcam based on a Sony sensor that promises excellent night video – and for the most part it delivers. This camera has noticeably better license plate legibility than many other 1080p dashcams in its price class. The built-in storage seems like an odd decision, but may make it easier for a user who does not want to buy extra memory. It also has quite a large battery.

During the day, video quality ranges from good to excellent. In sunny weather, there’s a lot of detail and brightness is accurate. It’s possible to read most oncoming license plates in the adjacent lanes even at fast speeds. The video looks great, albeit once and a while there’s just a little bit of visible compression noise in areas of high details (such as being surrounded by lots of tree branches). Even in those moments it’s still possible to read plates for the most part, but it would be nice to see a slightly higher bitrate. Overcast weather has the same characteristics: excellent video quality overall, with accurate colour and lots of detail.

At night, video quality is still very good and among some of the top cams I’ve tested. In the city, the video is slightly darker than other cameras but that makes details a bit clearer. It’s easier to read street names and see the makes and models of cars. License plates are not readable for oncoming traffic, which is normal. Plates are often readable on cars ahead of the camera travelling in the same direction. In the pitch black, illuminated by only headlights, this camera does a respectable job, with decently bright and detailed video.

Audio quality from the camera is a bit muffled but it’s possible to understand voices talking while the car is in motion. It wouldn’t be usable for high fidelity requirements like travel vlogging, but it should be audible in a pinch. At least the road noise is muffled too so voices are not drowned out by engine noise.

The Android app is straightforward enough. It is a little bit clunky to use, though it gets the job done. In the Android app, there’s options to preview the video, take snapshots, and see footage that was already recorded by the camera. You can also adjust camera settings on the fly, although there is not many of them. There’s settings for video resolution (1080p30 or 720p30), mic on/off, parking mode and date stamp. It’s functional, but not the most pretty.

The biggest issue with the app is permission requirements: at the time of writing, the Android app requires the permission to view/manage phone calls. I don’t think that’s necessary for a dashcam app, and is kind of invasive. DDPai has been in contact to say that the iPhone app doesn’t require that permission. They’re also apparently working on updating the app so that it does not require that permission. I’ll update this review once they do fix that.

One of the odd features of this camera is the built in storage. I can understand the reason behind it: this way users do not need to worry about buying extra memory cards. The problem is that there’s no way to plug in an SD card if you choose. Memory is one of the most common points of failure on a dashcam, so it would have been nice to have the option of an external card. Despite DDpai’s assurance that the memory in this camera is MLC (high quality and long lasting), if the memory does corrupt then the camera will have to be thrown out and a new one purchased. That might result in a lot of warranty claims for DDpai. The other thing to keep in mind is that the storage is internal so in order to get video off of this camera it is required to use the app over Wi-Fi or to take the camera out of the car and plug it into the computer. It’s not possible to remove the memory and plug it directly into a phone, tablet or computer. You’ll also need a spare micro USB cable since there’s only the long one included in the box.

The camera also has a nice feature: a timer to turn it off while in parking mode. It can be set to 1 hour, 6 hours, 24 hours or disabled. Setting it to a time ensures that it will not drain the cars battery when parked for a week. As someone with a car that has the lighter port always active, that’s a great feature and one I took advantage of while testing the cam. My car battery never died despite leaving the cam plugged in.

The camera also seems to have a relatively massive battery for a dashcam. With most cameras I have tested that use a battery, I can only record between 30 seconds and five minutes with the camera on its internal battery. With the Mix3 I filmed almost the entire review on the internal battery. I found that I could easily record between 30 and 60 minutes with the internal battery. That’s HUGE for a dashcam. A big battery means the camera can function in parking mode without power for longer. However, the problem with a big battery is that they do not do well in heat or cold. This could be an issue for someone living in a hot climate like Texas or Australia. I would not recommend leaving this camera in direct sunlight, and having to take it out of the car kind of defeats the purpose of having parking mode anyways.

From a sheer video quality perspective, this camera hits a home run. License plates are legible in most lighting situations, colour is accurate and video is detailed. The camera is not without its quirks, though, such as the big battery and internal memory. Some users may find those features useful while power users may want something that has a different feature set than this camera: a capacitor, 1080p60, and even some basics like a license plate number stamp.

Disclaimer: DDpai sent a copy of this camera for review. This review is our own genuine opinions based off of actual use.