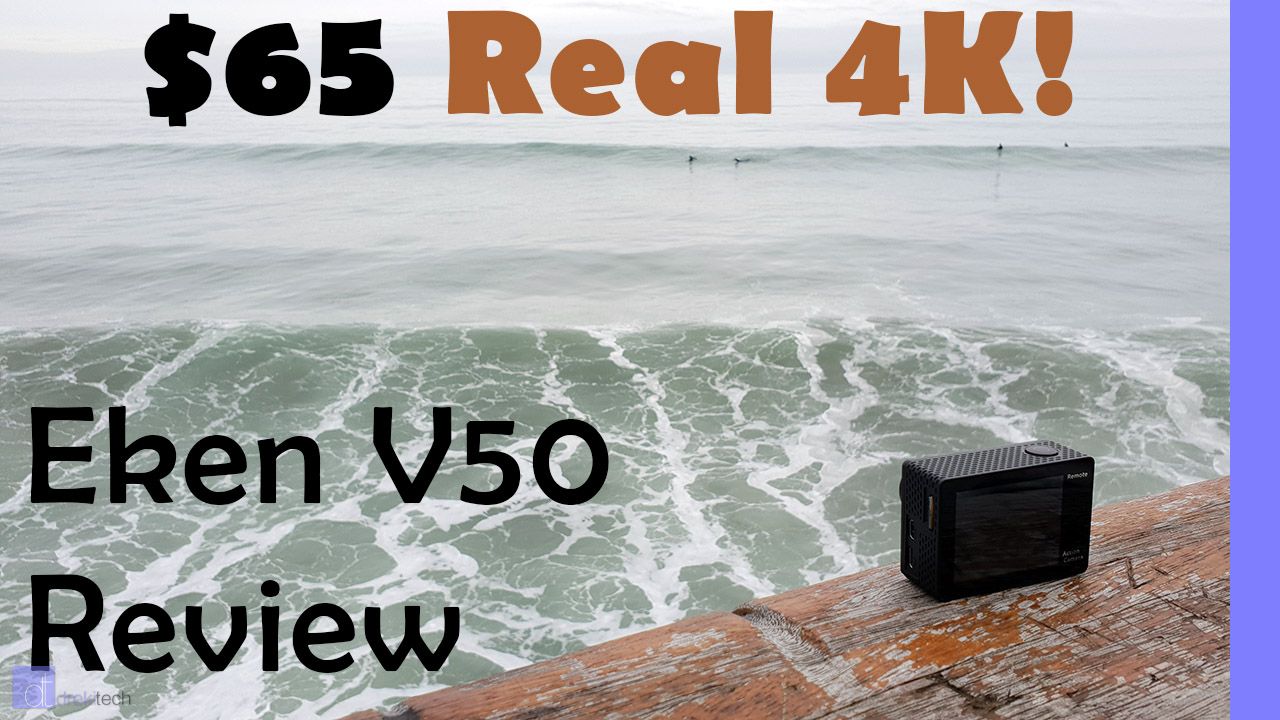 The Eken Alfawise V50 pro is surprisingly not based on the iCatch V50 processor – instead it is based on an Ambarella A12. At the current price of review ($65 USD) the performance is acceptable however there are several tradeoffs, including a lack of image stabilization. If you can afford the extra, I would highly recommend purchasing the Firefly 8SE or the ThiEYE T5 Edge instead.

Buy this camera at Gearbest.

Build quality of this camera is average, while the included accessories are above average. The camera itself is made out of plastic and has a slightly hollow feeling to it. Regardless, the buttons are nice and clicky and the user interface is responsive. The screen is bright and easy see in daylight. Eken did not include a tripod mount built into this camera. Instead, if you want to mount it on a tripod, you’ll have to use the included adapter.

The 4K on this camera is soft, likely due to the lens being poor quality. If you purchase this camera, expect to use it primarily in 1080p 60. 4K resolution does appear to be real 4K, although it is on the lower end of real 4K as far as image details goes. The softness is especially apparent at the edges of the frame where objects get a bit of a halo or duplication of straight lines.

That was quite disappointing because this camera renders very decent colour and brightness. In scenes with motion, the lack of detail is less noticeable. In 1080p60 mode this camera is more or less adequate so long as the camera is being held steady.

The biggest downside of this camera is apparent once you start using it for action-y things. It does not have image stabilization. This is pretty much a requirement for action cameras, in my opinion, and I struggle to recommend any camera without image stabilization these days. Cameras with IS are easier to film with and get good shots. There’s also significant lens distortion and no distortion correction setting.

Audio quality from the camera is above average. It’s loud, voices are clear, only occasionally peaking if I spoke while too close to the camera. There’s no way to adjust the mic volume or gain though.

Still photos are where the soft lens starts to become a problem. Despite these images being 12 MP, the still photos lack detail. Generally on cheaper cameras this is because the manufacturer lies about specifications and uses a low resolution sensor. However, this does not appear to be the case with the Eken. This camera allegedly uses a Sony IMX258 sensor (13 MP, 4K). Although companies are occasionally dishonest about the exact sensor they use, this is less common than merely exaggerating resolution. I suspect the poor results are a combination of bad optimization and a blurry lens. The images are fine when zoomed out or viewed on a larger screen, however, zooming in and cropping makes the images much less useful.

This camera scores bonus points because of its ease of use. There are not too many settings that would overwhelm a non-technical user. The time-lapse mode is especially easy to use and the menus are simplistic to navigate.

If you can spend more money on a better camera I highly recommend doing that instead. Considering the price, the Eken V50 pro is an OK camera but there’s significantly better available for not much more money. For example the SooCoo C30 is around the same price and available domestically in the USA. Despite some minor issues with colour and slightly worse audio quality, the C30 is a better choice than this Eken because it has image stabilization. In order to get better quality real 4K, the next step up is the ThiEYE T5 Edge, and then the Firefly 8SE (which is worth it if you can spend $120).