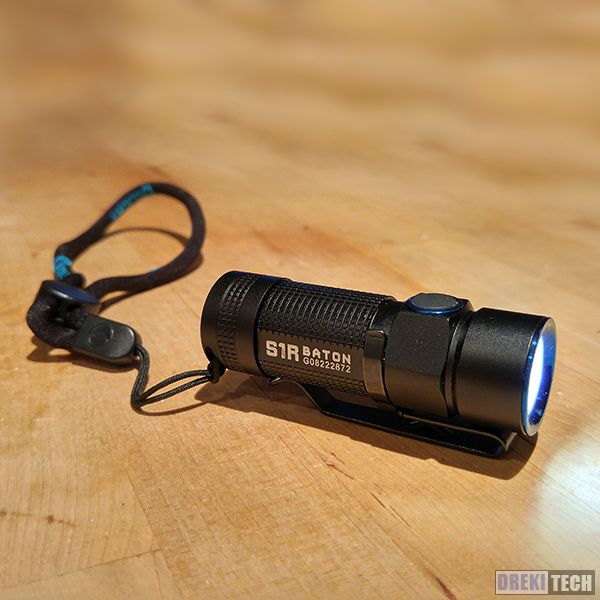 Summary: The S1R baton is a flashlight that packs a lot of brightness into a small body.

On first glance the S1R is an unassuming thing due to its small size, but it looks rugged and feels substantial in the hand. The metal body gives it a decent amount of weight. The button to turn the light on is located on the side, and included in the package is a lanyard and an additional USB LED. The lanyard came with a pin to install it easier – a thoughtful touch. The charger snaps onto the bottom of the light and is proprietary, so if lost there will be no easy way to recharge it. The base of the flashlight is also magnetic so it will stick to the fridges and sides of cars.

This light is bright. I have no way of measuring if it actually reaches the claimed 900 LM, so I tested it beside the other 500 LM torches I have on hand. It is noticeably brighter, with a slightly more focused beam than other standard flashlights. The highest brightness level produces a moderately focused light that is capable of illuminating distant trees. I tested this light on my camping trip last week and it came in handy a number of times: when I was having car troubles at night I just stuck the light to the hood of my car with the magnetic base then I could work hands free. The light illuminated my entire engine bay and was bright enough that I could solve the issue.

The downside of being so bright in such a small size is battery life. Because it uses CR123A batteries, the light is limited to about 500mAh of power. On the brightest setting that means it gets about 50 minutes of sustained brightness. The brightness started to drop around 30 minutes as the battery discharged, but it held modest brightness until just under the suggested 50 minutes of charge when it stopped working. If you are fine with a lower brightness setting it will last longer.

Use of this light is pretty straightforward: a quick press of the side button turns the light on, holding the button down cycles between brightnesses and double pressing the button sets a timer. I found that in the dark the button was a little difficult to find until I got used to its location.

This light gets VERY hot when it is on its brightest setting. The entire metal body becomes warm and the end is nearly burning. If I hold my hand six inches in front of the light it feels like a laser burning my hand. After a minute of the light being on its brightest setting it scales down the brightness a little bit, which I am assuming is to manage heat and battery discharge.

This light makes a great addition to my camping bag due to its compact size and brightness. On my trip I used it to repair my car, to navigate a dark camp site and to scare away a bear. I’m particularly fond of the build quality and the magnetic base.