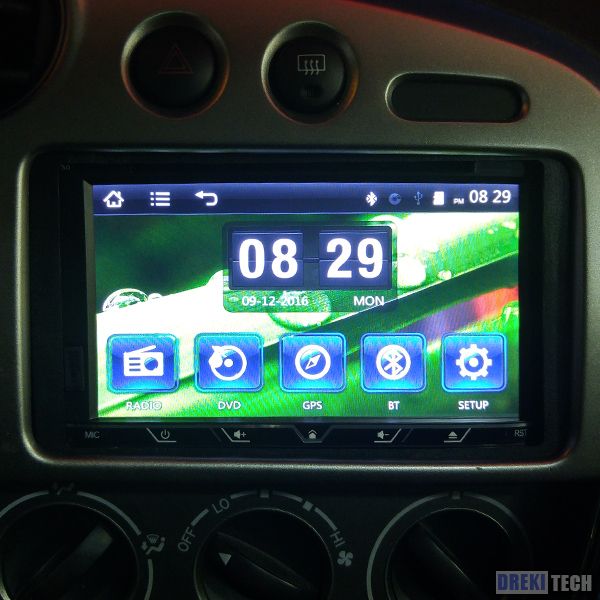 With Map Card
Without Map Card

This is an unbranded head unit that functions with primarily touch input. It comes in a plain box. It runs on a customs Windows CE software that resembles older Windows phones.

I’m a big fan of the minimal face of this unit. The sleek front buttons look great and the head unit mimics a much more expensive name brand model. The buttons all have a nice click to them and are quick to respond. At night they glow orange. In my opinion it is missing a few buttons: I am a chronic volume changer and would have preferred a volume knob and next/previous track buttons, but I’ve slowly gotten used to the on screen and button based controls. The back side of the unit is made from metal and there are dozens of mounting screws for different vehicles.

In most lighting conditions the screen quality is decent. In bright sunlight it is difficult to see as the brightness is not particularly high, but in overcast, rain or darker situations the screen is clear and the colours pop. It has excellent viewing angles. Despite not being very bright, I found that I was still able to see the screen while wearing sun glasses. The screen is covered in a matte finish and is built with resistive touch – meaning that any object can be used as an input device at the expense of multi touch capability. For the most part the touch input works great for changing the track or switching inputs.  I noticed that it isn’t very good for touch and drag. At night the screen is too bright and there is no way to dim it. The dimmest level of brightness is blinding and reflects off of my windshield a little. The stereo does automatically dim when the car lights are switched on (if your car supports this function).

I don’t have a fancy speaker system in my car, but with the stock speakers I found the sound to be fine. In the default settings it sounds a little bit muffled, but there are options to adjust the bass and treble to bring out more life in the music. It can hit hard bass and airy highs with those settings adjusted. I wish there was a proper 16-band equalizer though. Audio streams clearly from all inputs, including Radio, Line In and Bluetooth.

The software included is called Kudos maps, and it leaves a little to be desired. To be fair, compared to most of the mapping software built into car head units, it is about the same or better, but Google Maps has me spoiled. I ended up mostly using the screen mirroring feature to view Google Maps as it is more accurate and has more landmarks, but in a pinch to find an address the GPS software is fine. The maps software takes about 30 seconds to load. Inputting an address is pretty straightforward with the touch screen. The English voice is easy enough to understand and the directions are clear. It shows what lane is needed to make a turn and can also display information about speed and heading. There is a night and a day mode. When in the GPS software it is possible to switch back and forth between Bluetooth mode to change the track but there is no way to do it within the maps software. Also, there is no clock visible in the GPS screen. That’s an oversight.

My primary audio input is Bluetooth and I’m happy to say that for the most part it works well. Music streams clearly and sounds about as good as any other input. Bluetooth automatically connects after the stereo boots but it does not automatically start playing music (one press to play or install an app like Bluetooth Connect & Play). Call quality is fine, albeit a little on the quiet side. Callers could understand me and I could hear them. They could tell I was in a car but they said it wasn’t as bad as it could be.

The user interface is straightforward and designed for touch input. There are big buttons to select inputs and a large visible clock on most screens. Adjusting settings for the radio, Bluetooth and other inputs are well thought out. The design of the interface looks noticably dated compared to the modern flat design, but I don’t mind it personally. I like bright colours and that is a big feature of this interface.

I have not been able to test the backup cam function (refered to by the head unit manual as the back-a-car function). Installation was fairly straightforward. I needed to buy a wiring harness for my specific vehicle and a mounting kit. After that it was just a little bit of soldering and plug everything in place. All the functions worked immediately after that and all I needed to do was set up my preferred audio profile and I was ready to go.

This is a very specific product for a very specific purpose, and overall it does what it should and it does it fine. A few things could be improved: notably the brightness, the mapping software and the lack of volume knob, but if those are things you can live with it will be a fine stereo considering it is cheaper than other units with similar features. Compared to other stereos it seems to be about the same quality, and I would not be able to tell that it is unbranded/after market as it looks like it was made for my car.